﻿The United States, castigated by its critics as recently as a decade ago as a “hyper-power,” is now so weak and isolated on the world stage that it may cast an embarrassing and self-defeating veto of Palestinian membership in the United Nations. Beset by debt, mired in economic doldrums provoked by the cupidity and corruption of its business classes, and on the verge of withdrawing from Iraq and ultimately Afghanistan in defeat, the U.S. needs all the friends it can get. If he were the visionary we thought we elected in 2008, President Obama would surprise everyone by rethinking the issue and coming out in favor of a U.N. membership for Palestine. In so doing, he would help the U.S. recover some of its tarnished prestige and avoid a further descent into global isolation and opprobrium. 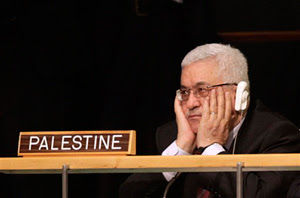 It is often the little things that trip up empires and send them spiraling into geopolitical feebleness. France’s decision to react brutally to the Algerian independence movement from 1954 arguably helped send its West African subjects running for the exits, much to the surprise and dismay of a puzzled Gen. Charles de Gaulle. Empires are always constructed out of a combination of coercion and loyalty, and post-colonial historians often would prefer not to remember the loyalty of compradors and collaborators. But arguably it is the desertion of the latter that contributes most decisively to imperial collapse.

Thus, it is highly significant that an influential Saudi prince warned the United States that a veto of Palestine at the U.N. could well cost the latter its alliance with Saudi Arabia. The kingdom is the world’s swing petroleum producer and has done Washington many favors in the oil markets, and although such favors were seldom altogether altruistic, Riyadh’s good will has been a key element in U.S. predominance.

The House of Saud has other options, after all. It has been thinking hard about whether its ideological differences with the Chinese Communist Party are not outweighed by common interests. Among these mutual goals is the preservation of a model of authoritarian, top-down governance combined with rapid economic advance to forestall popular demands for participation, as an alternative to Western liberalism. For its part, China has invested $15 billion in the Arab world in recent years and is an increasingly appealing destination for Arab capital. Beijing is supporting Palestinian Authority President Mahmoud Abbas’ initiative for recognition in the U.N.

NATO ally Turkey has also broken with the U.S. over Palestine policy, vowing to do what it can to end the shameful and illegal Israeli blockade on civilian Palestinians in Gaza. Turkish Prime Minister Recep Tayyip Erdogan has vowed to change Obama’s mind, reminding him of his 2010 speech to the U.N. General Assembly, in which the U.S. president looked forward to the establishment in short order of a Palestinian state. Erdogan says of the veto threat, “We have difficulties in understanding their position. ... The U.S. has always advocated a two-state solution.”

Even NATO ally France, which has troops fighting in Afghanistan alongside U.S. forces, broke with Obama on Palestine, advocating a compromise abhorred in Washington and Tel Aviv whereby the Palestinian Authority would join the Vatican in being a formal U.N. observer state. Indeed, NATO is divided on this issue, with Spain and Norway joining Turkey and France in bolting from U.S. leadership. In the wider European Union, the split is even more stark. With countries traditionally willing to follow the U.S. lead on important geopolitical issues now breaking with Washington on Palestine, it is no surprise that the tier of rising world powers known as the BRICS—Brazil, Russia, India, China and South Africa—is unanimously in favor of the Palestine bid at the U.N.

Also gone by the wayside are Arab dictators such as Zine el-Abidine Ben Ali of Tunisia and Hosni Mubarak of Egypt, who were usually willing to do Washington’s bidding in dealing with the Palestinians. The vital youth movements in the Arab world have not foregrounded the Palestine issue, afraid of giving their dictators an opportunity to change the subject from domestic issues of repression and corruption. But the invasion by some Egyptian protesters of the Israeli Embassy in Cairo and the forced withdrawal of Israeli ambassadors from Egypt and Turkey signal a likely turn in the region toward governments more attentive to public opinion in favor of the Palestinians in the Middle East. The revolutionary youth of 2011, having overthrown three governments and shaken a half-dozen more to their foundations, had idolized democracy and seemed willing to give Washington a hearing. But Obama could squander the remnants of his good will by appearing to support the repression of a whole people’s yearning for basic human rights.

Iran, which has suffered a loss of prestige in the Arab world because of its support for the repressive government of Bashar al-Assad in Syria (from which Tehran has recently only mildly backpedaled), could recover some of its past cachet if the U.S. vetoes the Palestinian bid for U.N. membership. Iran’s public relations difficulties in the Arab world had been a godsend for Obama in the past six months, but he could easily squander this opportunity.

The American inability to fashion a consensus on this issue among its closest allies, much less on the world stage, stands in stark contrast to the role Washington had been able to play only two decades ago. One recalls the unarguably impressive performance of George H. W. Bush in 1990 in constructing a U.N.-backed international alliance, including the Arab League, for the purpose of the Gulf War. In part, the failure derives from declining economic and political clout. The U.S. economy is only 20 percent of the world gross domestic product now, down from 25 percent in 1990 (and down from 50 percent in 1945), and America has powerful new economic challengers such as China, which could overtake it in a decade. 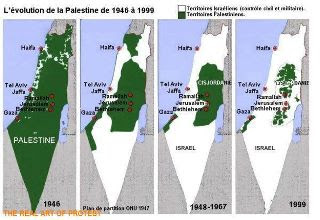 But in large part, Washington’s current difficulties derive from adopting a position contrary to international law and to basic human decency. Israel’s creeping annexation of the West Bank looks suspiciously like Saddam Hussein’s occupation of Kuwait—both being land-grabs that violate the United Nations Charter, Article 2.4. The stateless Palestinians ultimately have no individual rights. No national courts uphold their property deeds or rights to resources such as water. At least if they are recognized by the vast majority of U.N. member states, the Palestinians may gain the standing to sue in national and international courts to stop the ongoing torts being committed against them by the Israeli settler-industrial complex. In standing against this attempt to right an epochal historical wrong to an entire people, Obama puts the United States on the wrong side of history and the wrong side of world opinion. Neither is likely to forgive him.
Posted by Giordano Bruno... the 2nd at 20:17