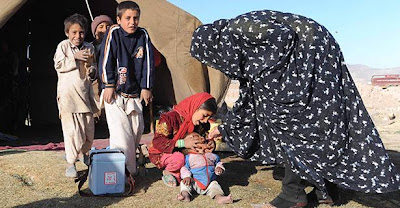 A health worker, right, administers a polio vaccine to a child during a vaccination campaign in Afghanistan in October 2011. A CIA decision to disguise a spy operation as a health mission might strengthen some fundamentalist religious leaders' mistrust of vaccines. (Photo credit should read Aref Karimi/AFP/Getty Images)
via In These Times:


One grotesque aspect of the covert operation against Osama bin Laden has the potential to blow back—with the easy loft of a germ in a windstorm—and kill millions, especially children.

The Obama administration now openly embraces assassination as a useful and legal tactic in the increasingly amorphous project called “war.” But a new twist will spread collateral damage far beyond luckless civilians who are in the wrong place at the wrong time when Navy Seals swoop in, or when hit squads in bland U.S. offices unleash deadly remote-controlled drone strikes halfway around the globe.

Before deploying its team, the U.S. government sought to confirm that Bin Laden was actually in the walled compound in Abbottabad, Pakistan. Not a bad idea. But then the CIA cooked up a ruse to obtain confirmatory DNA by entering the house under the guise of a Hepatitis B vaccination program.

Although the “medical” team got inside, it is not known if it obtained the proof it sought. But the CIA decision to disguise a spy operation as a health mission did supply clear evidence to people around the world who fear that vaccination is a Western plot. Already suspicious, they will cite this abuse to resist immunization against polio, measles, cervical cancer and other debilitating diseases.

“In the mountains, the religious people can use [the Hep-B plot] to say, ‘See? We have been saying there is an agenda,’” Atiq ur-Rehman, director of a hospital in Peshawar, told the Washington Post in July.

The Taliban and other fundamentalist religious leaders (and some Americans) need no encouragement in concocting fabulous conspiracies. Even before the CIA operation, skeptics were charging that Western-sponsored vaccines are designed to sterilize or exterminate Muslims. Others assert that Islam forbids vaccination, charging that the drugs contain “extracts from bones and fat of an animal prohibited by God: the pig,” as Pakistani Taliban commander Maulvi Faqir Mohammed announced on a radio station that reaches from eastern Afghanistan to northwest Pakistan, according to the AP.

The CIA defends its Abbottabad “vaccination” program with a combination of outright lies and blame-the-victim stupidity. “It was conducted by genuine medical professionals who planned to provide everyone with the full course of treatments,” the Guardian reported, quoting “a senior U.S. official.” (In fact, the CIA-sponsored team gave only a small number of children the first of three required shots, and never followed up on the other doses.) “The damage here was caused by locals reacting to the mistaken idea that this was a fake public health effort.”

Tell that to Save the Children, which had to suspend medical programs and evacuate personnel because the Hep-B team-head had covered for the CIA mission by concocting a specious affiliation with the nonprofit.

The broader impact of the misguided covert op is on global public health itself. Saving millions of lives a year, vaccination has been the most effective medical intervention in history, next to clean drinking water. Before vaccination made it the first major disease to be eradicated, smallpox took 5 million lives annually. The measles vaccine has more than halved the number of deaths to the still-unconscionable figure of 1 million-plus a year. And polio, which used to claim hundreds of thousands annually, has been largely contained by vaccination efforts.

But just as the prospect of eradicating polio nears, programs are starting to falter, and vaccination fear is a key factor. In 2009 and 2010, 23 previously polio-free countries were re-infected by imports of the virus, according to the World Health Organization. The worst-affected area happens to be where the CIA ran its scam. Pakistan and Afghanistan (along with India and Nigeria) are the world’s only remaining polio-endemic countries, and rates are rising in Pakistan and Nigeria.

So the CIA got its man, but the deception—disguising spies as caring medical personnel—was lethally shortsighted. Such blatant violations of medical ethics stoke conspiracy theories with real fuel.

The fire is spreading. “As long as a single child remains infected, children in all countries are at risk of contracting polio,” the WHO reports. And the same is true for adults, and for the many diseases that are preventable through safe immunization—an effort that is contaminated when governments and spy agencies hijack public health.
Posted by Giordano Bruno... the 2nd at 12:20