The Military-Industrial Complex, the Permanent War Economy and its War Criminal Agents

"A 15-month investigation by the Guardian and BBC Arabic reveals how retired US colonel James Steele, a veteran of American proxy wars in El Salvador and Nicaragua, played a key role in training and overseeing US-funded special police commandos who ran a network of torture centres in Iraq. Another special forces veteran, Colonel James Coffman, worked with Steele and reported directly to General David Petraeus, who had been sent into Iraq to organise the Iraqi security services"
Posted by Giordano Bruno... the 2nd at 23:36 No comments: Links to this post

The Trinidad Guardian newspaper
The heart of the matter 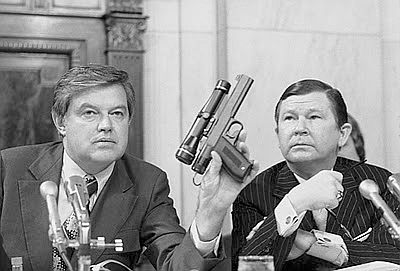 US Senators Frank Church and John Tower examine a Central Intelligence Agency (CIA) poison dart gun that causes cancer and heart attacks, during the US Senate Select Committee’s investigation into the assassination plots on foreign leaders in 1975.
It was a case destined for the X-Files and conspiracy theorists alike, when Venezuelan president Hugo Chavez speculated that the US might have developed a way to weaponise cancer, after several Latin American leaders were diagnosed with the disease. The list includes former Argentine president, Nestor Kirchner (colon cancer) Brazil’s president Dilma Rousseff (lymphoma cancer), her predecessor Luiz Inacio Lula da Silva (throat cancer), Chavez (undisclosed), former Cuban president Fidel Castro (stomach cancer) Bolivian president, Evo Morales (nasal cancer) and Paraguayan president Fernando Lugo (lymphoma cancer). What do they have in common besides cancer? All of them are left-wing leaders. Coincidence? In his December 28, 2011 end-of-year address to the Venezuelan military, Chavez hinted that the US might have found a way to give Latin American leaders cancer.
“Would it be so strange that they’ve invented the technology to spread cancer and we won’t know about it for 50 years?” Chavez asked. “It is very hard to explain, even with the law of probabilities, what has been happening to some leaders in Latin America. It’s at the very least strange,” he said. Chavez said he received warning from Cuba’s former leader Fidel Castro, who has survived hundreds of unsuccessful assassination attempts. “Fidel always told me, ‘Chavez take care. These people have developed technology. You are very careless. Take care what you eat, what they give you to eat … a little needle and they inject you with I don’t know what’,” he said.

Sounds far-fetched? WikiLeaks reported that in 2008 the American Central Intelligence Agency (CIA) asked its embassy in Paraguay to collect all biometric data, including the DNA of all four presidential candidates. Right here in the Caribbean conspiracy theorists believe that the CIA also had a hand in the deaths of T&T’s own civil rights activist and Pan-Africanist Kwame Ture, Jamaica’s legendary reggae icon Bob Marley and Dominican Prime Minister Rosie Douglas. During the United States Senate Select Committee’s investigation into CIA’s assassination plots on foreign leaders in 1975 it was revealed that the agency had developed a poison dart gun that caused heart attacks and cancer.

The gun fired a frozen liquid poison-tipped dart, the width of a human hair and a quarter of an inch long, that could penetrate clothing, was almost undetectable and left no trace in a victim’s body.

Kwame Ture or Stokely Carmichael, the radical former Black Panther leader who inaugurated the Black Power Movement of the 1960s went to his death claiming that the CIA had poisoned him with cancer. Ture died of prostate cancer at the age of 57 in 1998. His friend, multi-media artist and activist Wayne “Rafiki” Morris, said Ture said “without equivocation” that the CIA gave him cancer. “I knew Kwame from 1976 and for all the time I knew him he never drank or smoked cigarettes,” Morris said. “He was a very good swimmer and exercised regularly, he didn’t have any medical condition and was very conscious of his health.”

Bob Marley died of melanoma cancer in 1981. He was 36-years-old. The official report is he contracted cancer after injuring his toe which never healed while playing football in 1977. The conspiracy theorists allege that Marley was given a pair of boots with a piece of copper wire inside that was coated with a carcinogenic substance that pricked his big toe by Carl Colby, son of the late CIA director William Colby. There is an eerie similarity between Marley and Castro involving poisoned shoes. Cuban ambassador to T&T, Humberto Rivero said the CIA and Cuban exiles tried more than 600 attempts to kill Castro from exploding cigars, injecting him with cancer, to a wet suit lined with poison. In the case of Marley the CIA allegedly used cancer in his shoes, for Castro they placed the highly toxic poison thallium salts in his shoes. After only eight months being elected as Prime Minister of Dominica, radical politician Rosie Douglas was found dead on the floor of his residence in 2000.

The cause of death was listed as a result of a massive heart attack. His heart was twice its normal size. Just like Ture and Marley, he exercised regularly. Douglas’ eldest son, Cabral insisted that his father had been murdered and also hinted at the involvement of the CIA. Moshood Abiola, the man widely believed to have won the 1993 elections in Nigeria, was reported to have died of a heart attack after he was given a cocktail which expanded his heart to twice its size in 1998. Jack Ruby, the assassin who killed US president John Kennedy’s alleged assassin Lee Harvey Oswald, died from lung cancer in 1967. What was strange was the cancer cells were not the type that originate in the respiratory system. He told his family that he was injected with cancer cells in prison when he was treated with shots for a cold. He died just before he was to testify before Congress.

Lockerbie bomber, Abdelbaset al-Megrahi, developed terminal cancer. The leader of Canada’s left-leaning Opposition party, the New Democratic Party (NDP), Jack Layton died of an undisclosed form of cancer in 2011. It will appear that having leftist tendencies are hazardous to a person’s health. From 1953 the Russians were using microwaves to attack the US embassy staff in Moscow, Russia. One third of the staff eventually died of cancer from this microwave irradiation. Imagine how advanced and sophisticated assassination technology has become today.