Chris Hedges made these remarks about Osama bin Laden’s death at a Truthdig fundraising event in Los Angeles on Sunday evening.

I know that because of this announcement, that reportedly Osama bin Laden was killed, Bob wanted me to say a few words about it … about al-Qaida. I spent a year of my life covering al-Qaida for The New York Times. It was the work in which I, and other investigative reporters, won the Pulitzer Prize. And I spent seven years of my life in the Middle East. I was the Middle East bureau chief for The New York Times. I’m an Arabic speaker. And when someone came over and told Jean and me the news, my stomach sank. I’m not in any way naïve about what al-Qaida is. It’s an organization that terrifies me. I know it intimately.

But I’m also intimately familiar with the collective humiliation that we have imposed on the Muslim world. The expansion of military occupation that took place throughout, in particular the Arab world, following 9/11—and that this presence of American imperial bases, dotted, not just in Iraq and Afghanistan, but in Kuwait, Saudi Arabia, Doha—is one that has done more to engender hatred and acts of terror than anything ever orchestrated by Osama bin Laden. 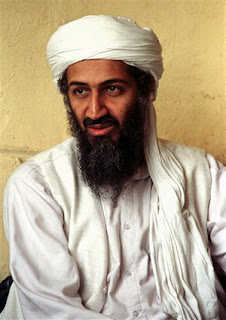 AP / Pablo Martinez Monsivais
And the killing of bin Laden, who has absolutely no operational role in al-Qaida—that’s clear—he’s kind of a spiritual mentor, a kind of guide … he functions in many of the ways that Hitler functioned for the Nazi Party. We were just talking with Warren about Kershaw’s great biography of Hitler, which I read a few months ago, where you hold up a particular ideological ideal and strive for it. That was bin Laden’s role. But all actual acts of terror, which he may have signed off on, he no way planned.

I think that one of the most interesting aspects of the whole rise of al-Qaida is that when Saddam Hussein … I covered the first Gulf War, went into Kuwait with the 1st Battalion, 1st Marines, was in Basra during the Shiite uprising until I was captured and taken prisoner by the Iraqi Republican Guard. I like to say I was embedded with the Iraqi Republican Guard. Within that initial assault and occupation of Kuwait, bin Laden appealed to the Saudi government to come back and help organize the defense of his country. And he was turned down. And American troops came in and implanted themselves on Muslim soil.

When I was in New York, as some of you were, on 9/11, I was in Times Square when the second plane hit. I walked into The New York Times, I stuffed notebooks in my pocket and walked down the West Side Highway and was at Ground Zero four hours later. I was there when Building 7 collapsed. And I watched as a nation drank deep from that very dark elixir of American nationalism … the flip side of nationalism is always racism, it’s about self-exaltation and the denigration of the other.

And it’s about forgetting that terrorism is a tactic. You can’t make war on terror. Terrorism has been with us since Sallust wrote about it in the Jugurthine wars. And the only way to successfully fight terrorist groups is to isolate [them], isolate those groups, within their own societies. And I was in the immediate days after 9/11 assigned to go out to Jersey City and the places where the hijackers had lived and begin to piece together their lives. I was then very soon transferred to Paris, where I covered all of al-Qaida’s operations in the Middle East and Europe.

So I was in the Middle East in the days after 9/11. And we had garnered the empathy of not only most of the world, but the Muslim world who were appalled at what had been done in the name of their religion. And we had major religious figures like Sheikh Tantawi, the head of al-Azhar—who died recently—who after the attacks of 9/11 not only denounced them as a crime against humanity, which they were, but denounced Osama bin Laden as a fraud … someone who had no right to issue fatwas or religious edicts, no religious legitimacy, no religious training. And the tragedy was that if we had the courage to be vulnerable, if we had built on that empathy, we would be far safer and more secure today than we are.

We responded exactly as these terrorist organizations wanted us to respond. They wanted us to speak the language of violence. What were the explosions that hit the World Trade Center, huge explosions and death above a city skyline? It was straight out of Hollywood. When Robert McNamara in 1965 began the massive bombing campaign of North Vietnam, he did it because he said he wanted to “send a message” to the North Vietnamese—a message that left hundreds of thousands of civilians dead.

These groups learned to speak the language we taught them. And our response was to speak in kind. The language of violence, the language of occupation—the occupation of the Middle East, the wars in Iraq and Afghanistan—has been the best recruiting tool al-Qaida has been handed. If it is correct that Osama bin Laden is dead, then it will spiral upwards with acts of suicidal vengeance. And I expect most probably on American soil. The tragedy of the Middle East is one where we proved incapable of communicating in any other language than the brute and brutal force of empire.

And empire finally, as Thucydides understood, is a disease. As Thucydides wrote, the tyranny that the Athenian empire imposed on others it finally imposed on itself. The disease of empire, according to Thucydides, would finally kill Athenian democracy. And the disease of empire, the disease of nationalism … these of course are mirrored in the anarchic violence of these groups, but one that locks us in a kind of frightening death spiral. So while I certainly fear al-Qaida, I know its intentions. I know how it works. I spent months of my life reconstructing every step Mohamed Atta took. While I don’t in any way minimize their danger, I despair. I despair that we as a country, as Nietzsche understood, have become the monster that we are attempting to fight.