Bradley Manning and GI Resistance to US War Crimes 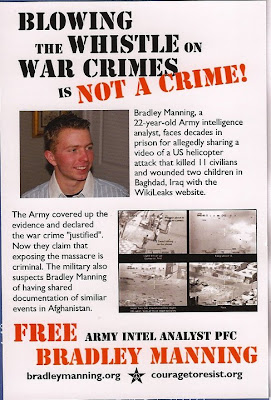 Independent journalist Dahr Jamail spent nine months reporting directly from Iraq following the US invasion in 2003. His stories have been published by Inter Press Service, Truthout, Al-Jazeera, The Nation, The Sunday Herald in Scotland, the Guardian, Foreign Policy in Focus, Le Monde Diplomatique, the Independent, and many others. On radio as well as television, Dahr reports for Democracy Now!, has appeared on Al-Jazeera, the BBC and NPR, and numerous other stations around the globe.

Jamail is the author of two recent books: “Beyond the Green Zone: Dispatches From An Unembedded Journalist” (2008) and “The Will To Resist: Soldiers Who Refuse To Fight in Iraq and Afghanistan” (2009). He also contributed Chapter 6, “Killing the Intellectual Class,” for the book Cultural Cleansing in Iraq: Why Museums Were Looted, Libraries Burned and Academics Murdered (2010). Learn more at http://www.dahrjamailiraq.com/


*﻿
Angola 3 News: On April 4, 2010, WikiLeaks.org released a classified 2007 video of a US Apache helicopter in Iraq, firing on civilians and killing 11, including Reuters’ photojournalist, Namir Noor-Eldeen, and his driver, 40 year old Saeed Chmagh. No charges have been filed against the US soldiers involved.

In sharp contrast, a 22-year-old US Army intelligence analyst named Bradley Manning has been accused of leaking the classified video. Arrested in May and facing up to 52 years in prison for a range of charges, Manning is now being held under what lawyer/journalist, Glenn Greenwald, has termed “inhumane conditions.”

Manning’s support website declares that “exposing war crimes is not a crime.” Indeed, the Nuremberg Laws, established after the horrors of WWII, declare that soldiers have a legal obligation to resist criminal wars. Let’s please take a closer look at this issue of US war crimes. What do you think are the strongest arguments that have been made for why US invasions of Iraq and Afghanistan are criminal?

Dahr Jamail: To be clear, while I’ve covered Iraq extensively, I’ve not covered Afghanistan. Thus, I’ll keep all my answers in the context of my expertise, that being Iraq.

That said, the US-led invasion and occupation of Iraq could not have more clearly violated international law. Even former Secretary General of the UN, Kofi Annan, said in September 2004 that the Iraq war was illegal and breached the UN Charter.

An illegal war is thus the mother of all war crimes, for from that stem all the rest. What I’ve seen in Iraq has been a parade of war crimes committed by the US military: rampant torture, collective punishment (Fallujah is an example), deliberate firing on medical workers, deliberate killing of civilians for “sport,” and countless others.

Then, there is the fact that both occupations are so clearly about control of dwindling resources and their transport routes, that the excuses given for them by the US government (both Bush and Obama) are both laughable and insulting to anyone capable of a modicum of critical thought.

A3N: How do you rate the corporate media’s coverage of the Bradley Manning story?

DJ: It’s been a farce. A classic case of “shoot the messenger.” When someone becomes a soldier, they swear an oath to support and defend the US constitution by following “lawful” orders. Thus, they are legally obliged by their own oath to not follow unlawful orders. What Manning did by leaking this critical information has been to uphold his oath as a soldier in the most patriotic way. Now compare that with how he has been raked over the coals by most of the so-called mainstream media.

A3N: How do they address the argument that “exposing war crimes is not a crime?”

DJ: Usually they don’t, because the corporate media, and the government for that matter, avoid the words “war crime” as though they are a plague. Thus, they avoid the issue at all cost.

A3N: In your opinion, how do the corporate media present the US occupations of Iraq and Afghanistan to the US public?

DJ: With Iraq, the occupation is presented as though it was a mistake, as though the great benevolent US Empire was mistakenly mislead into the war. But since “we” are there, it is good that at least Saddam Hussein has been removed, and now, of course, the US has only done the best it can in a tough situation.

With Afghanistan, the occupation is presented to the public as the ongoing frontline battle against “terrorism,” while, in reality, they should call Afghanistan “pipeline-istan” because it’s all about securing the access corridors for natural gas and oil pipelines from the Black Sea, through Afghanistan (the 4 main US bases there are located along the exact pipeline route) to the coast of Pakistan.

A3N: How does the corporate media narrative contrast with what you have seen first-hand in Iraq?

DJ: The difference is night and day. The whitewashing and outright lying by the corporate media is offensive to me. It is repulsive, in fact, when compared to what the reality on the ground is in Iraq. The brutality of the US military there against the civilian population would shock people. More than 1 million Iraqis have been slaughtered because of the US occupation. As you read this you can know that one in every ten Iraqis remains displaced from their homes. Can you imagine that? The US policy in Iraq has been so destructive, that one out of every ten Iraqis is currently displaced from their home, now at more than 7 years into the occupation?

A3N: Returning now to the issue of soldier resistance, what are the various reasons that anti-war soldiers give as motivation for their opposition to the occupations?

DJ: Mostly from what the soldiers see once they arrive in the occupation: the buckets of money being made by the contractors, the lack of goals for the occupation beyond generating huge amounts of profit for war contractors, and that the reasons given for the invasion/occupation were entirely false. So most seem to become anti-war when they see that they’ve been lied to, used, betrayed, and that they are putting their lives on the line so that war contractors can get richer.

A3N: What are some of the ways that anti-war soldiers in Iraq and Afghanistan have resisted?

DJ: Myriad ways. The most common, and least dramatic, is going AWOL. More than 60,000 soldiers have now taken that route since 11 September 2001. So, often, folks will go do a deployment, come back for a break, then simply not show up when it’s time for their unit to redeploy.

Some of the more interesting means of resistance I’ve found entailed doing what soldiers refer to as “search and avoid” missions. One soldier told me how they would go out to the end of their patrol route in their Humvees, find a big field, and park. They’d call in to base every hour to check in and say, “We’re fine, we’re still searching this field for weapons caches.” And they would sit there doing nothing until the time was up for their patrol, and they’d return to base. I met more and more soldiers who shared similar stories, from all over Iraq, during different times of the occupation. That’s when I realized how low morale was and how widespread different kinds of resistance had become.

Other soldiers found out how to manipulate their locator beacon on the GPS unit in the Humvees, so they’d sit and have tea with Iraqis, while someone moved their beacon around so their base thought they were patrolling.

A3N: How has US military leadership responded to this resistance?

DJ: They don’t know about much of it when it’s happening. Although there have been times when a unit has been caught doing something like the aforementioned, and they’ve broken up the unit, but that has been quite rare overall.

With AWOL troops, the military doesn’t have the manpower to send their MPs after them, so they let them go, wait for them to get a traffic ticket, for example, then the cops hand them over to the MPs who throw the AWOL soldier in the brig to await a court-martial. Then, often, the soldier is told he/she can go back to Iraq/Afghanistan, or they will be court-martialed.

A3N: In your book The Will To Resist, you document many different cases of soldiers that faced criminal charges for their opposition to US wars. We discussed Bradley Manning’s case earlier in this interview, but can you please tell us about any other recent, ongoing cases that have begun since the publication of your book in 2009? How can our readers best support these soldiers?

DJ: Most of those I followed that took place after my book was published have been completed, time served by the soldiers, and then their release into freedom from the military. Two cases of this type really stand out: Victor Agosto and Travis Bishop. Both of these men stood up and refused to be deployed, were court-martialed, served their time, and are now free.

There will be more to come as these occupations persist. A group to follow who regularly supports these resisters is Courage To Resist. They are based in Oakland and are run by Jeff Paterson, himself a resister to the first Gulf War. They do a great job of tracking resisters and what folks can do to support them. Support includes donations, but also making phone calls, writing letters, and other forms of activism.

DJ: At the risk of sounding like a cynic when I feel I’m making an honest assessment, I don’t feel there will be a mass organization of an anti-war movement. We already live in a police state. What is left of the anti-war movement is completely infiltrated, and is being torn apart by sectarianism and profiteering (the peace-industrial-complex).

In addition, I feel that the main reason for the failure of the anti-war movement is that most folks involved in it still believe they can work within the system to generate change, when the system is completely corrupted already. By “system,” I mean the federal government. That apparatus is broken beyond repair, it is completely corrupted, and needs to be dissolved. Thus, any movement that seeks to work within the parameters set by the system (such as weekend permitted demonstrations, thinking you can effectively pressure your representative, etc.) is doomed before it begins, because it is still playing by the rules set out by those in power. Rules guarantee never to jeopardize the loss of power by those who hold it.

Only truly radical actions, meant to subvert the system and shut it down to a point where business as usual is impossible until demands are met, are all that is left.


*
Angola 3 News needs your help to spread the word!... Please consider joining the networks we are now building at You Tube, Live Journal, Care2, Twitter, Facebook, and My Space. If you have advice about other websites we should consider networking at, or can help in any other way, please write us at angola3news@gmail.com. Read other articles by Angola 3 News, or visit Angola 3 News's website.
Posted by Giordano Bruno... the 2nd at 11:03